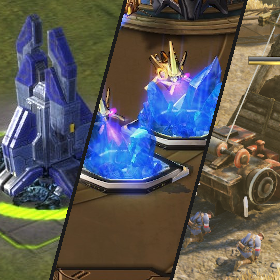 In Real-time Strategy (RTS) Games, players often have to gather resources from specific spots in a level that we will call “expansion”. The action of taking an additional expansion will be called “expanding”. To do so, they need to invest their current resources to gather more. By resources, I specifically mean the ones present in the games such as “Metal” in Planetary Annihilation or “Minerals” in Starcraft but it can be more creative as we will see later.

A mass extractor in Supreme Commander

The economies are different in every RTS game and every variation has an impact on the level design. What we are interested in here is how much freedom there is in the positioning of expansions depending on the parameters of the economy. There are multiple layers that create restrictions on level design such as factions. They are not relevant here because it’s a layer of restrictions that comes later in the design of an RTS game. In this article, we assume the game has only 1 faction which has only 1 combat unit.

The economy in numbers

There are 4 main parameters in a RTS game economy:

There are other values outside the economy that are useful to normalize the parameters seen above. This will let us compare different games.

Why use median? There are games with units or structures that greatly stand out from the rest by having large amounts of health or damage compared to the others. These units often appear in the very late stages of the game so they have a minimal impact on the ability to expand. Medians are less affected by extreme values.

From these 4 values of an economy, there are multiple metrics that are useful:

The risk of expanding

Now we have these numbers, it’s time to discuss the concept of risk of expanding. In RTS games, you have 3 options to spend resources:

When the player is spending resources to increase the income, he is not building additional units. And so, there is the risk that he can lose the game because he invested too much into expanding his economy and he simply didn’t have enough units to defend an attack. The risk of expanding is based around this dynamic.

We can create a risk score from the previous metrics. It will allow us to see, in any RTS game, how risky it is to expand and how much freedom there is in the placement of expansions.

There is another effect of risk score that is not related to level design but that is worth mentioning. It also affects the strategic depth of the game. It means how meaningful the choice between expanding, building combat units or teching up is. In a game with a low risk score, players can expand and build combat units at the same time so there is less diversity in the player’s choices. While in a game with a high risk score, the choice between expanding and building combat units is important and it creates more diversity in strategies.

To find the risk score, I decided to attribute a score to the time ROI, time Destroy and ratio Cost and then add them together. By doing so, the 3 metrics below become equally important in the risk score. The brackets of the values are decided based on the largest values found in the games that can be seen later.

Now we have the formula, let’s use it in some example games.

In-game observations: Players expand in all directions at once right from the start of the game. Players can sometimes be punished from expanding too fast but not in a fatal way. The placement of resource spots is varied. They can either be close or far to the starting location, spread out evenly or clumped in clusters. Anything works here.

In-game observation: Players expand slowly. It usually takes more than 20 minutes to control all the available expansions. Players cannot expand too fast or they will be punished and lose. Maps often have their bases placed in similar locations which leads to a low map diversity.

There is a difference in Iron Harvest compared to the 2 previous games. The expansions are captured by placing at least one unit near it. As such, there is no direct cost of taking an expansion so C = 0.

Also, because these are capturable points, it doesn’t have any hitpoints and the mDPS doesn’t matter. tDEST is equal to the capture time of an expansion.

In-game Observations: Expanding in Iron Harvest is very easy. All the expansions are taken in the first few minutes. The placement of resource spots is varied. They can either be close or far to the starting location, spread out evenly or clumped in clusters. Anything works here again, even more than in Planetary Annihilation.

In-game Observations: For now, there is only one playable map. Players take their second and third bases in the first five minutes but it’s rare to see more bases being taken. It can be attributed to the small size of the unique map. The prediction of the score is that the economy has an average restriction of the placement of resource spots. That means there isn’t that much faction design space before multiplayer maps become similar to each other. One of the goals of the game is to have many asymmetrical factions which can prove to be difficult without crippling the multiplayer map variety. The ban and pick phase of the Immortals, which are small variations inside a faction, may be able to alleviate the level design restrictions that come from a high number of factions.

Here you can see the spreadsheet with the mCE and mDPS values of the games above.

To be useful, the risk score of a game should be compared to other game’s risk score. Alone, it doesn’t mean anything and isn’t useful.

We notice there is a correlation between the risk score and diversity of the locations of expansions. A higher risk score leads to more rigidity in the positioning of expansions and thus, less variety in the level design.

It can be noted that these numbers are more important in the early stages of a game. As a game goes on, it becomes easier to take additional expansions because players have more builders, can produce multiple workers at the same time, and have more units to capture points and more importantly, the ratio between the cost of an additional expansion and the cost of all his combat units is smaller.

This is why expansions that can be taken in the later stages in a game have more flexibility in their positioning because the risk score is lower than in the early stages of a game.

It would be useful to create a risk score for as many games as possible but it’s time consuming to find the median DPS and cost of units/buildings. So i have to draw a line somewhere and stop. However, if you are motivated to find these values for the game of your choice, PM me on Twitter and i’ll be glad to add it to my list.

Why does this matter? Knowing more about the level design of your game before its release can help in designing the correct maps. If your game has a high risk score, it will be useful to spend more time to find what are the correct map layouts. Getting the maps right at the release will help with player retention early on and thus bring more money.

And if your game has a low risk score, the level design will be easier to figure out and there is less risk of messing up the maps.

In a game with many asymmetrical factions that create many restrictions on the level design, it’s probably preferable to design the economy in a way where it is easy to expand. That way, it still allows for a great map variety which can translate for a longer interest of the game from the players.